I don’t remember exactly when I first stumbled into it. I do recall it was a rapper’s Twitter account turned my eyebrows skywards. His tweets had something to do with the Earth being flat. I waited for the punchline; none arrived. The tone was effectively this: ‘How do we really know it’s round?’ I also don’t recall if that rapper was B.o.B—I’ve since discovered that high-level athletes buy into it—and it’s good that his GoFundMe to prove Earth is flat has only received $6,899 of his $1m goal, but still.

I have little patience for stuff like this, yet I’ve also long been fascinated by cults. The power of small cults that became established religions, like Christianity and Islam, is simply incredible, but smaller ones are even more baffling.

The flat Earth movement certainly fits this bill. You have the cult requirements: an oppressor—all those suspect professors and physicists oppressing us by, you know, thinking we inhabit a globe—and a rallying cry to combat the status quo.

Of course, many Flat Earthers do have cultish inspirations; in this case, the Bible. An entire industry has popped up, including the crafty marketing efforts by, I kid you not, a former advertising salesman at a Christian radio station. Robbie Davidson’s recent Flat Earth International Canada conference drew 250 attendees at $199 a pop. He’s not alone, as Maclean’s reports:

Davidson’s YouTube channel, Celebrate Truth, has more than 100,000 subscribers. That reach expands when he collaborates with Emmanuel Lokonga, another Edmontonian who is an HVAC technician by day and the voice behind Thecontroversy7 YouTube channel. An early adopter, Lokonga started his channel in 2009. Now he has more than 150,000 subscribers who tune in for his steady stream of End Times prophecy, thoughts on demonic possession (see Beyoncé, homosexuals and yoga as chief offenders) and flat Earth.

Because if you practiced yoga on a circular planet, you’d obviously fall off.

Flat Earthers are easy targets. They know that; one showed up to the conference wearing a tin foil hat. Any cult that can make fun of itself is a distraction at best; at least they’re not advocating for ethnic cleansing. But underlying the “conspiracy” is a troubling trend that is not only persistent but growing: the notion that conventional wisdom is in the hands of elite academics and should, by default, be open to interpretation. 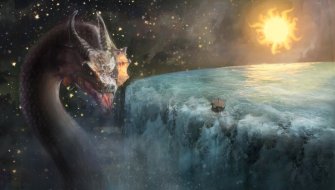 The end of the world in Norse mythology. (Image: Shutterstock)

A recent YouGov poll found that 66 percent of millennials “firmly believe the Earth is round.” Scientific American found these data disconcerting, so they got a hold of the raw results; testing for age, they concluded that 82.5 percent of 18-24-year-olds fit into that category. That’s better, yet that still means nearly two out of every 10 millennials believe the planet is not, in fact, round. This honestly shouldn’t be a hard one.

Even stranger is the fact that more millennials are likely to believe climate change is influenced by human activities, showing that scientific literacy is not the issue. Younger people are also less likely to be religious than older generations.

Education researcher Harry Dyer might have an explanation. Earlier this year he attended a flat-Earth convention in Birmingham, England, and shared his experiences with Quartz.

The idea of trusting your gut or trusting your feelings came up a lot at the conference. I think it is indicative of [a form of] populism where people want to move away from statistics and create an environment that engages more in emotions.

To Dyer, the problem isn’t believing the Earth is flat per se. That will likely remain a fringe occupation for the tin foil set. What’s important, and disconcerting, is that information exchanged on the fringes indicate future trends. Remember how quaint those tea party rallies were a decade ago?

Information is always emotionally driven. Venues that offer conflicting ideas—universities at their best—serve as a buffer against extremism. Yet universities in particular (and education in general) have been monetized and specialized. The subtler aspects of debating have been sacrificed by the vengeful hands that pound out tweets scrawled in ALL CAPS.

Being heard is now more important than being right, and being right has long been more valued than being compassionate. In such a toxic environment all facts are open to interpretation. Sadly, the interpreters are only proficient in one language—and even that one, barely.