That’s why there’s such a need to make sure future generations become acquainted with coding. The young people of today need to one day support the growing demand for code-literate professionals.

Know How Things Work, Not Just That They Work

“Devices are so much a part of our lives — we have a computer in some form wherever we go — that the ability to create in that medium is as fundamental as the ability to write,” Craig Federighi, an executive at Apple, recently said to the BBC.

In fact, the ability to code could be the “next level of literacy,” according to Federighi.

The importance of this skill is not lost on us. However, the drive to learn it is often given up before it’s even attempted. Coding has a poor image. It gets a bad rap as something that’s too difficult to learn. Computer programmer (and Big Think expert) Larry Wall argues that it’s not really hard to start. The process is akin to writing a recipe for creating a dish. It’s just a very, very detailed recipe:

Hour of Code Stakes a Vision

Programs like Code.org’s Hour of Code campaign have gone through enormous efforts to make learning the basics of JavaScript so easy that a 4-year-old could do it. Part of the battle is fixing that image problem and making the world of coding look more accessible, and the folks over at Code.org have done that by enticing little ones to learn how with favorite characters from Minecraft and Frozen. 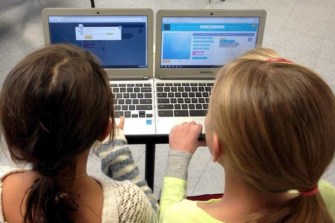 Apple is also joining in, opening its 468 stores this week so that curious minds can take tutorials as part of the annual Hour of Code campaign.

Federighi hopes Apple’s participation will help change some people’s minds about what they imagine coding to be. “People sometimes have a view of programming that is something solitary and very technical,” he said to the BBC. “But programming is among the most creative, expressive, and social careers.”

Natalie has been writing professionally for about 6 years. After graduating from Ithaca College with a degree in Feature Writing, she snagged a job at PCMag.com where she had the opportunity to review all the latest consumer gadgets. Since then she has become a writer for hire, freelancing for various websites. In her spare time, you may find her riding her motorcycle, reading YA novels, hiking, or playing video games. Follow her on Twitter: @nat_schumaker

The Second Amendment is “… not a right to keep and carry any weapon whatsoever in any manner whatsoever and for whatever purpose.”