Acciaroli is a quaint little town in south-west Italy. Tucked into the Cilento coast 85 miles south of Naples, its winding cobblestone roads, small stone houses, and friendly locals could have been plucked straight from the movie Chocolat. Acciaroli has one major difference to its idyllic French counterpart; more than 1 in 10 of its residents is over 100 years old.

Researchers from Rome’s Sapineza University and the University of California San Diego spent six months studying Acciaroli’s 700 residents. They discovered that those residents have “unusually good blood circulation for their age,” The Independent reports. The 100-year-old residents had circulation similar to Americans in their 20s and 30s. The key element aiding that circulation was low levels of adrenomedullin, a hormone that widens blood vessels. Adrenomedullin builds up over time and causes blood vessels to contract, which often leads to vascular problems like cardiovascular disease – the leading cause of death for men and women over 65, according to the American Heart Association. Acciaroli’s residents are safe from those issues, because they have adrenomedullin “in a much reduced quantity… and [it] seems to act as a powerful protecting factor, helping the optimal development of microcirculation, or capillary circulation,” The Independent reports. 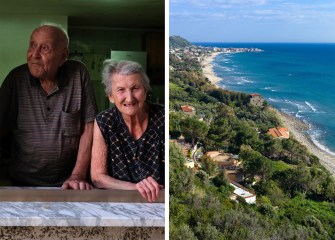 100-year-old Antonio Vassallo and his wife Amina Fedollo, 93, pose in their house in Acciaroli, southern Italy. The town has a disproportionately high number of centenarians in its population of about 2,000, and is renowned for its low rates of heart disease and Alzheimer’s. A study attempted to find out why 300 people there have hit the 100 mark. (Photo: MARIO LAPORTA/AFP/Getty Images)

Acciaroli residents were able to keep their adrenomedullin levels low due to a number of factors. They ate locally sourced fish, rabbit, and chicken. They also ate home-grown vegetables, and olive oil. All of those foods are staples of the Mediterranean diet, which has numerous health benefits including reducing cardiovascular disease. The locals also eat rosemary, which the researchers found to help improve brain function. “When we tested it, we found a dozen different compounds in there,” said UC San Diego cardiologist Dr Alan Maisel to The Telegraph. “Scientific studies have shown that acids [in rosemary] help the function of the brain.” That diet does seem to lead to increased health and longevity. Psychiatrist Drew Ramsay told us why here:

There is one other thing helping the residents of Acciaroli live to 100: sex. Lots and lots of it. “Sexual activity among the elderly appears to be rampant,” Dr Maisel told The Telegraph. “Maybe living long has something to do with that. It’s probably the good air and the joie de vivre.” Research out of Wilkes University in Pennsylvania backs that up, according to WebMD: it found that people who have sex have higher levels of antibodies that defend against germs and viruses than people who don’t. Regular sexual activity also lowers blood pressure. “One landmark study found that sexual intercourse specifically (not masturbation) lowered systolic blood pressure,” Dr. Joseph J. Pinzone CEO of Amai Wellness told WebMD.

“This project will not only help to unlock some of the secrets of healthy aging, but will build closer ties with researchers across the globe, which will lead to more science and improved clinical care in our aging population,” said Salvatore DiSomma, MD, lead Italian investigator and professor of emergency medicine at University of Rome La Sapienza in a statement. While all of those results still need to be replicated before becoming gospel, they do follow general longevity guidelines. So take heart, eat more foods that reduce the effects of cardiovascular disease, and have more sex. It’s all good for you.

One type of dog in particular is linked with the lowest rates of cardiovascular disease in their human pals.
Health

Supercentenarian DNA May Hold the Ultimate Secret to Longevity

Find the right genes and we’ll have a way to prolong life and good health, perhaps indefinitely.
Health

“Currently, inflammation is considered a major factor in the development of depression, dementia, and other brain disorders,” says Dr Drew Ramsey.
Surprising Science

Looking Forward to a Stress-Free Retirement? Not So Fast Says This New Study

The stress we take on at work now will surely pay off in retirement, right? Well, brace yourself.
Health

Is Your Diet Fighting Depression – or Intensifying It?

We know there’s a gut-brain connection, but just how deep does it go? Could we treat depression just by adopting a particular diet?
Up Next
Personal Growth

Can We Think Critically Anymore?

In A Field Guide to Lies, neuroscientist Daniel Levitin explains how to wade through an endless sea of data and statistics to hone our critical thinking skills.