Here is the current leaderboard for the ISTE conference keynote crowdsourcing project. As you can see, there’s been a shakeup at the top. Jeffrey Piontek is now slightly ahead of Chris Lehmann (if you don’t count Chris’ votes in the Universal Design for Learning category). Other folks who have moved up the charts quickly over the past 24 hours include Karen Cator and Alan November.

This clearly is going to be an interesting process! I’ll try to post a daily update between now and December 15. Have you voted yet? 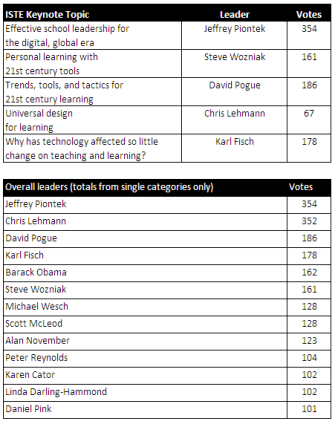