I’ll try to post an update every day or two between now and December 15. Have you voted yet? 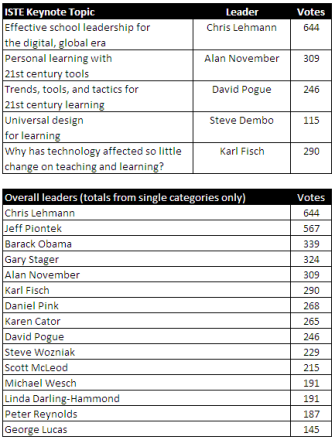 FYI, if votes from all categories were totaled, this would be the leaderboard: 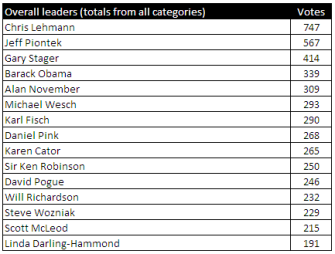 Someone with more time than me would have to go in and see how many of these votes were from the same person but in different categories. For now, suffice it to say that Chris Lehmann, Gary Stager, Michael Wesch, Sir Ken Robinson, and Will Richardson have more support than appears from the single category totals.

Does your school organization reflect our new digital information landscape?

[cross-posted at LeaderTalk]CASTLE has been doing a great deal of technology leadership training for the School Administrators of Iowa, some of the Iowa Area Education Agencies, some of the Minnesota […]