[Of course I’m voting for Chris Lehmann since I nominated him and had him in mind from the very beginning!]

The final voting round for ISTE’s 2010 conference keynote speaker has begun! Here are your choices… 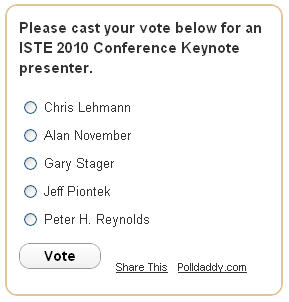 You can compare the list above with the final voting totals from Round 2 (my apologies for previously leaving Peter Reynolds off the bottom list): 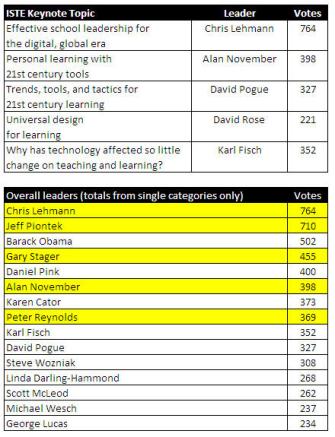 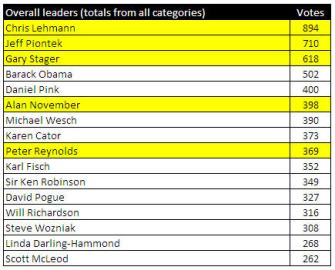 All five of these individuals will be fantastic keynote speakers. I confess I would have liked to have seen Karl Fisch and Michael Wesch make the final list.

Note that there is no discussion allowed on the ISTE site for this final round. As Leslie Conery explains,

[ISTE is] staying truer to Surowiecki’s guidance and building on the public discussion that has come before to solicit decentralized and independent opinions. The votes for each of the keynote candidates will be made anonymously and the tallies will not be shown during the voting process.

In other words, ISTE would like you to look over what’s gone before and then make your own decision (which I believe is also what we did in Round 2?). I think that ISTE is trying to minimize groupthink and herding. I’m still not sure that prohibiting discussion (or “lobbying” or whatever you want to call it) makes sense (or is even possible in this hyperconnected age where we all can have voices outside ISTE’s site), but we’re all learning in this keynote experiment and I’m not going to second guess ISTE on its choice for this final round. I recognize that it’s difficult to set up a process that allows individuals to be informed, but not unduly influenced, by others. I and others have had plenty of opportunities to state our case for Chris; hopefully the final voting totals will mirror the previous round.

Question for which I don’t have an answer: If the final totals differ from Round 2, will that confirm or discredit the validity of this whole process?

Kudos to ISTE for trying this interesting experiment. Happy voting, everyone!

What I said to the NEA

Earlier this month I asked what you would say to the NEA Board of Directors if you had the chance. Thank you, everyone, who chimed in with thoughts and suggestions. Here’s […]