Here is the current leaderboard for the ISTE conference keynote crowdsourcing project. Jeffrey Piontek has widened his lead slightly over Chris Lehmann. Alan November also is moving quickly up the charts.

FYI, if you count totals across ALL categories, Chris Lehmann would be in the lead with 462 votes. Also, Michael Wesch would be tied with David Pogue for fourth with 199 votes and Will Richardson would be on the list with 107 votes.

I’ll try to post a daily update between now and December 15. Have you voted yet? 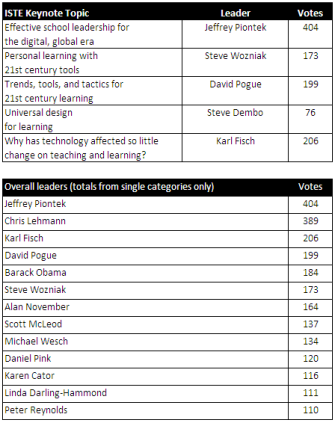