It’s time to vote for the 2010 Edublog Awards, the ‘Oscars of the education blogosphere.’ All votes are due by noon Eastern, December 14. Winners will be announced soon thereafter. 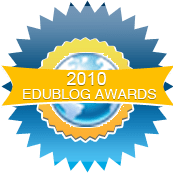 CASTLE blogs – including this one – have been nominated in several categories:

Best educational use of a social network (Connected Principals)

There are scores of excellent sites from which to choose. Go check out the lists and vote for your favorites!

Last year I was nominated for a Lifetime Achievement award. I said at that time that, while flattered, I had no business winning such an award ahead of many others that had gone before me (and were so pivotal to my own development as a blogger). I continue to stand by that statement.

David Warlick and Karl Fisch have won this award to date; both were superb choices. This year I was going to make a tough choice between either Will Richardson (last year’s runner-up) or Stephen Downes. Since Stephen isn’t on the list, I’m checking the box next to Will’s name. If you don’t agree with my choice, there are many other excellent candidates in this category, including some names that I should have put on last year’s list.

I said this to some foundation folks recently:Any corporation, government agency, worldwide church, school, university, foundation, or other institution that enjoyed the ability to broadcast to the passive masses is going to […]