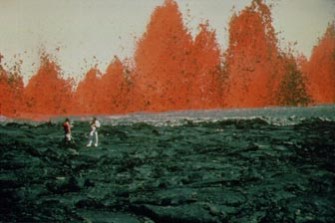 For those of you looking for some non-Redoubt-related volcano news, you can take a look at the 25th anniversary of the last eruption at Mauna Loa (there is some nice video footage provided by KHNL if you follow the link). By no means is this volcano “dormant”, but rather this is a typical lull in activity at the Hawaiian shield volcano. Its neighbor, Kilauea, has been erupting for decades, but the last major eruption at Mauna Loa was in 1984, when the volcano sent lava downslope with 3,000 feet of Hilo, moving 15 miles in a few days. Monitoring at Mauna Loa has been increased dramatically since the 1984 eruption so that scientists at the Hawaiian Volcano Observatory (HVO) don’t get caught by surprise the next time Mauna Loa erupts. If you feel like reliving (or just living) the 1984 eruption, a DVD has been released to commemorate that eruption called “Rivers of Fire” (many of you might have seen this on VHS, but now its out on DVD).