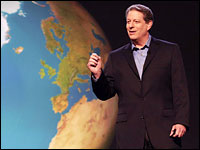 All eyes today are on Capitol Hill as former VP Al Gore testifies before Congress on global warming. Bill Broad’s NY Times’ article last week has launched a new narrative in coverage, as various journalists review whether “Gore got the science right” in Inconvenient Truth. Interviewed by host Renee Montagne, NPR’s Richard Harris weighs in today with his view. Of note, it appears that Harris was first turned on to the possibility of unease among scientists when he attended last year’s American Geophysical Union meetings, where Gore spoke:

I saw Al Gore give a talk at the American Geophysical Union meeting in San Francisco last December. He was cheered by this enormous audience of scientists, who were really excited to hear his message that it’s time to take global warming seriously. But after the talk, a couple of [the scientists] came up to me and said, you know, “He didn’t exactly get the science right.” Gore said that Arctic ice could be gone entirely in 34 years, and he made it seem like a really precise prediction. There are certainly scary predictions about what’s going to happen to Arctic sea ice in the summertime, but no one can say “34 years.” That just implies a degree of certainty that’s not there. And that made a few scientists a bit uncomfortable to hear him making it sound so precise.

Harris notes that in crafting the film, Gore was carefully attuned to not only the culture of science but also Washington, resulting in a popularized depiction of the science that doesn’t quite satisfy all scientists, but gets the main points right:

MONTAGNE: Is this partly cultural in the sense that, by nature and by profession, scientists care about all of the details?

HARRIS: I think it’s partly cultural, and I think that in that sense, Al Gore is very well attuned to the culture of Washington, D.C. The culture of Washington, D.C. is: “Don’t do anything unless there is a crisis.” And that’s been the problem with global warming for all these years: It’s something serious to be worried about – the worst case scenarios are pretty scary – but Al Gore has realized that if you want to get attention, you really have to focus on the crisis. You have to make people worry about things maybe a little bit more than scientists would say.

MONTAGNE: Is there some element of – if you will – professional jealousy here?

HARRIS: Among the scientists? No. I think the scientists are actually pretty grateful by and large that Gore has succeeded in bringing their issue to the public’s attention. But scientists do care very much about how precise the details are. And when it’s not exactly right, they bristle a little bit. But, [that’s] the difference between a popularizer, like Gore, and scientists, for whom the details really are what’s most important.

Related
The Future
Custom Image Test
Lorem ipsum etc etc etc etc
Life
Visualization test
Lorem ipsum dolor sit amet, consectetur adipiscing elit. Nullam id tincidunt mi. Morbi malesuada nulla sit amet est hendrerit tincidunt. Etiam viverra, nisl id volutpat eleifend, est augue sodales orci, […]
L&D Strategy
Transfer of learning: The necessary step to make learning stick
Transfer of learning is a concept that should be top-of-mind when planning any learning and development program. Why? In a perfect world, the billions of dollars organizations collectively spend every […]
Starts With A Bang
Why we’ll never see back to the beginning of the Universe
We thought the Big Bang started it all. Then we realized that something else came before, and it erased everything that existed prior.
Thinking
Is there an afterlife? See how your answer compares to polled Americans
There is more consensus on what heaven looks like than hell.
Up Next
Guest Thinkers
Framing Conflict: A New Blog to Watch
Update your RSS feeds, there’s a major new blog on the scene that is worth reading. Framing Conflict was launched a few months back, with a focus on the media’s […]