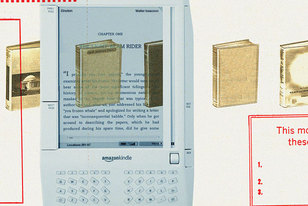 nAnyone browsing the Amazon.com site for last-minute holiday gifts knows that it has been close to impossible to avoid checking out the new Amazon Kindle. But just how innovative is this “revolutionary wireless reading device”? Last week, Sam Anderson of New York magazine ran an impossibly sardonic review of the Kindle, referring to it as a Victorian iPod:

“In the current ecosystem of American gadgetry—in which predatory herdsnof omnivorous iBeasts devour ever greater zones of our attention—thenKindle’s devotion to text feels practically medieval. It’s not clearnyet whether this musty innovation is naïve or brilliant. It’s thenspiritual antithesis of the iPhone, and the rare piece of technologynthat seems to encourage, rather than sabotage, the contemplative life.nIt’s like an iPod for Victorians. They should make it out of woodnpaneling instead of white plastic.”

And that’s not even the best part of the review. Here’s the line that made me bust out laughing: “Overall, it looks like the unloved remnant of one of those wild nightsnback in 1987, when an Etch-a-Sketch drank too much Bartles & Jaymesnand ended up locked in a three-way with a graphing calculator and ancredit-card swiper.” By the end of the article, Anderson has softened his tone a bit, perhaps recognizing the humble act of reading text on dead trees rather than on sleek and sophisticated screens is sadly becoming a thing of the past.