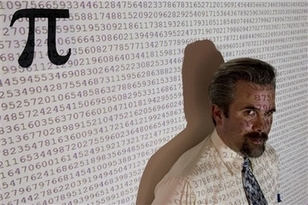 nToday is American pi day. Using the American convention of representing today’s date as 03.14.07, it’s easy to see why mathematicians are so excited about today’s date, which very much resembles a quick approximation of the value of pi, or 3.14159. (One can only imagine the lack of decorum that must have prevailed back in 1915, when the date was a perfect 03.14.15). Yahoo! News has the details:

“[This is a story] about a curious group of people with an almost religious zeal for anmind-numbing string of numbers. Actually one number, made up of a chainnthat is known — so far — to be more than one trillion digits long. Theynare the acolytes of the church of pi.

And once a year many of them gather to talk about pi, rhapsodizenabout it, eat pi-themed foods (actual pie, sure, but so much more),nhave pi recitation contests and, just maybe, feel a little lessnsheepish about their unusual passion.