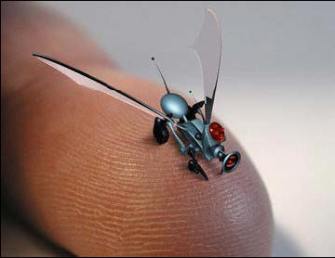 An artist’s take on the “scary wonder” of nanotechnology.

The asbestos of tomorrow? As we wrote in our article last year at The Scientist, that’s not the type of frame device that augurs well for public perceptions of nanotechnology. But it’s exactly the perceptual lens by which the New York Timescovers a new study appearing this week at Nature Nanotechnology. As Kenneth Chang opens the article, setting the train of thought for readers:

Nanotubes, one of the wonder materials of the new age of nanotechnology, may carry a health risk similar to that of asbestos, a wonder material of an earlier age that turned into a scourge after decades of use when its fibers were found to cause lung disease, researchers said Tuesday.

The asbestos comparison immediately places nanotechnology in the mental box of uncertainty and risky health impacts. For several years, consumer advocates have used asbestos as a familiar historical example to anchor interpretations of nanotech, but now this advocacy package has been given resonance by a study appearing this week in the journal Nature Nanotechnology. From the NY Times article:

A team of researchers reported that injecting nanotubes into the abdomens of mice induced lesions similar to those that appear on the outer lining of the lungs after the inhalation of asbestos…When foreign particles like smoke or dust land in the lungs, cells known as macrophages engulf the particles and clear them away. Some asbestos fibers are too long for the macrophages to handle, resulting in lesions. The researchers hypothesized that nanotubes would cause similar problems if they were long, but not if they were short or tangled into a ball…The mice injected with the short nanotubes or small carbon clumps did not develop disease. Those injected with long nanotubes or asbestos developed lesions on the tissue lining.

In its coverage, the LA Times ran this headline: “NANOTECHNOLOGY CANCER RISK FOUND.” Alan Zarembo reinforces the frame of reference in his lede paragraps to the article:

Certain types of carbon nanotubes — microscopic graphite cylinders used in a small but growing number of Space Age applications — could pose a cancer risk similar to that of asbestos if inhaled, scientists reported Tuesday. Researchers found that mice injected with nanotubes quickly developed the same biological damage associated with early exposure to asbestos fibers, a known carcinogen. The study showed “the potential to cause harm if these things get into the air and into the lungs,” said coauthor Andrew Maynard, a physicist at the Woodrow Wilson International Center for Scholars in Washington.

Shifting frames in coverage of nanotechnology also appeared yesterday at Canada’s paper of record. As the Globe and Mail reports, the Canadian Institute for Environmental Law and Policy is pushing a focus on the public accountability dimensions of the technology. Emphasizing a regulatory vacuum, the advocacy group released a report this week calling for nanomaterials to be banned in foods and packaging, and for mandatory labeling in cosmetics, personal-care products and cleaning agents.

Related
The Future
Custom Image Test
Lorem ipsum etc etc etc etc
Life
Visualization test
Lorem ipsum dolor sit amet, consectetur adipiscing elit. Nullam id tincidunt mi. Morbi malesuada nulla sit amet est hendrerit tincidunt. Etiam viverra, nisl id volutpat eleifend, est augue sodales orci, […]
L&D Strategy
Transfer of learning: The necessary step to make learning stick
Transfer of learning is a concept that should be top-of-mind when planning any learning and development program. Why? In a perfect world, the billions of dollars organizations collectively spend every […]
Starts With A Bang
Why we’ll never see back to the beginning of the Universe
We thought the Big Bang started it all. Then we realized that something else came before, and it erased everything that existed prior.
Thinking
Is there an afterlife? See how your answer compares to polled Americans
There is more consensus on what heaven looks like than hell.
Up Next
Guest Thinkers
In 2008, the Democratic Nominee Will Be the Evangelical
The irony of the 2008 presidential race is that this time around, the Democratic nominee is by far the more religiously devout candidate, promoting a born again language and professed […]