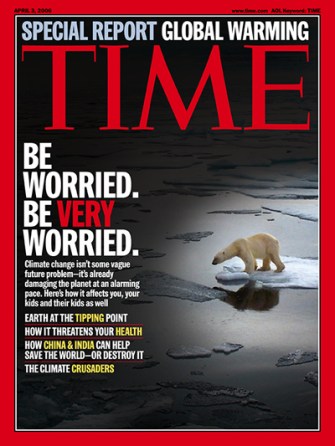 Back in the spring of 2006, Time magazine ran the cover at left warning Americans to “Be Worried, Be VERY Worried” about global warming. As I’ve written in different places (summary), this type of packaging for coverage of climate change is representative of the Pandora’s Box frame of catastrophe.

By focusing in on specific dramatic environmental impacts such as melting polar ice, sea level rise, the threat to polar bears, or the possibility of more intense hurricanes, advocates and journalists seek to dramatize a technical issue and provoke public concern and attention. As Ellen Goodman coined it: “This is your Earth. This is your Earth on carbon emissions.” Indeed, the metaphor is representative of a fear appeal strategy in health communication, much like the famous anti-drug PSAs from the 1980s.

Yet there are a couple unintended problems with this lead frame, as I have discussed. First, this line of communication plays directly into the hands of climate skeptics, only further reinforcing a deep partisan divide in climate change perceptions. As Andrew Revkin of the New York Times explains, given that the error bars of uncertainty for each of these climate impacts are much wider than the general link between human activities and global warming, these claims are quickly challenged by critics such as James Inhofe as liberal “alarmism,” putting the issue quickly back into the mental box of scientific uncertainty and partisanship.

Second, from research in health communication, we know that these types of environmental fear appeals, especially when lacking specific recommendations for how citizens can respond to the threat, also likely translate into a sense of fatalism and inaction on the part of many members of the public. 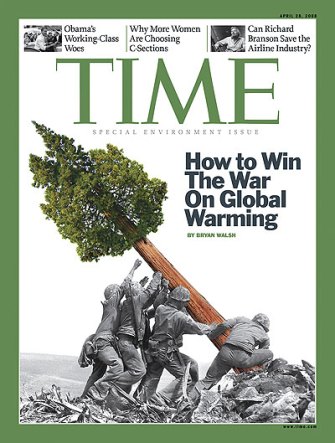 But things seem to be changing. Gore’s Inconvenient Truth is perhaps the best example of the Pandora’s Box frame. Recognizing the limitations of this type of message strategy, his new communication initiative appears to have adapted in important ways, emphasizing new, more unifying messages. This type of message shift is represented in the latest issue of Time magazine, a special issue linked to this weekend’s Earth Day. As the cover at left suggests, gone is the fear appeal of a Pandora’s Box of looming disaster, and in is place is a moral appeal to “mobilize for the war against climate change.” The lead article to the issue opens by comparing the climate challenge to the civil rights movement, the Space Race, and the recovery from the Great Depression. It then moves into specific recommendations on how to win the “Long War,” with a heavy focus on solutions that will also grow the economy.

Does Advanced Science Education “Kill Off” Your Faith?

In Expelled, Richard Dawkins recounts how learning about science “killed off” his faith. And PZ Myers tells us that the more science literacy we have in society, the less religion […]