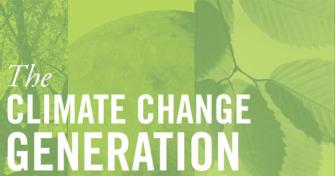 Monday night, March 1, starting at 630pm, American University’s School of Communication will be hosting a panel discussion focused on “The Climate Change Generation: Youth, Media, and Politics in an Unsustainable World.” [Follow the link for location on campus and directions. This is a rescheduled event from February that was postponed due to weather.]

The event will be broadcast live at 7pm on WAMU, the capitol region’s NPR news station. A downloadable MP3 of the broadcast will also be available through WAMU. Live and archived video of the event will be streamed by the American Observer, a project of the graduate program in journalism at AU. Check out the preview page that Observer staff have put together.

Also released on Monday evening will be a survey analysis and report authored by AU professor Lauren Feldman in collaboration with myself and colleagues Anthony Leiserowitz (Yale University) and Edward Maibach (George Mason University.)

Based on a new analysis of nationally representative survey data collected by Leiserowitz and Maibach in January 2010, the report finds that Americans between the ages of 18 and 34 are, for the most part, split on the issue of global warming and, on some indicators, relatively disengaged when compared to older generations. Journalists can contact me at nisbet AT american DOT edu for an advance embargoed copy.

Related
Life
Visualization test
Lorem ipsum dolor sit amet, consectetur adipiscing elit. Nullam id tincidunt mi. Morbi malesuada nulla sit amet est hendrerit tincidunt. Etiam viverra, nisl id volutpat eleifend, est augue sodales orci, […]
L&D Strategy
Transfer of learning: The necessary step to make learning stick
Transfer of learning is a concept that should be top-of-mind when planning any learning and development program. Why? In a perfect world, the billions of dollars organizations collectively spend every […]
Starts With A Bang
Why we’ll never see back to the beginning of the Universe
We thought the Big Bang started it all. Then we realized that something else came before, and it erased everything that existed prior.
Thinking
Is there an afterlife? See how your answer compares to polled Americans
There is more consensus on what heaven looks like than hell.
Thinking
How science changes the way we think, according to 10 leading scientists
A group of prominent scientists shares how research has changed them.
Up Next
Guest Thinkers
The Right Room for a Dialogue: New Policy on Anonymous Comments
I’ve long questioned the value of anonymous blogging or commenting. Much of the incivility online can be attributed to anonymity. And with a rare few exceptions, if you can’t participate […]