I am pleased to announce that Jim Dornberg of EdTechUpdate is our first BlogBall champion!

Well, okay, not that pleased given that my third-place team ended up sixth after the playoffs but, nonetheless, Jim deserves congratulations! Jim’s Motor City Kitties beat out Chris Lehmann’sLehmann’s Demons in an extremely hard-fought final matchup. As promised, CASTLE will be sending Jim a trophy to recognize his championship.

Here are the final standings (and a manager’s list) for anyone who’s interested. The first season of edublogger fantasy baseball was extremely fun. If you’re interested in participating next year, drop me an e-mail with the word BASEBALL in the subject. Maybe we’ll get enough folks for two leagues… 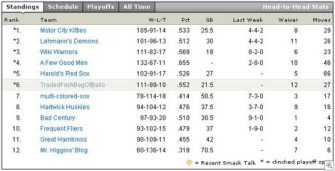 Help! My IT director’s locked me down!

Here’s a message that I recently received from a middle school science teacher:nnI am a technology-loving science educator. I need your help and here is the short version of my […]