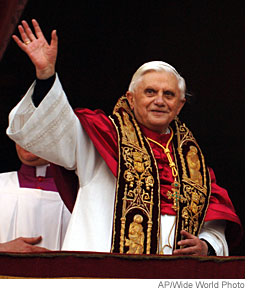 Following Pope Benedict’s late August seminar on evolution, the consensus view from Science magazine and intelligent design watchdogs appeared to be that the Vatican was not yet ready to endorse ID, but rather was likely to come out in support of a theological view of evolution.

Yet, the Pope, perhaps in an effort to appease conservative members of the Church, continues to send out mixed messages on the issue, and ambiguity can be a powerful communication tool for ID supporters. For example, just before the meetings, the Pope replaced George Coyne, director of the Vatican Observatory, who had been a vocal critic of ID. Meanwhile, the Pope’s longtime confidant Cardinal Schonborn remains active in his attacks on evolution. The Vatican is supposed to settle the matter with a forthcoming publication based on the weekend seminar, but if statements to date are any indication, the publication is likely to be more of the same when it comes to ambiguity.

These continued mixed messages translate into a religious Rorschach test, with ID proponents like the Discovery Institute reading into the weekend the Vatican’s support for their cause. Indeed, the Pope’s confusing signals remain a powerful strategic communication tool for conservatives to gain support for ID, especially among Catholic audiences abroad.

By selectively bending the Pope’s statements to appear as an endorsement of ID, conservative proponents are able to fashion messages that resonate with Catholic identity, and for the miserly public, these are precisely the type of information short cuts that can swing public opinion.

Over the summer, I was asked by the editors at the Spanish edition of Foreign Policy magazine to contribute an article that examined the prospects for ID going global, winning the hearts and minds of international audiences. After backgrounding the US debate, here’s what I wrote in the English version that was then translated into Spanish. (The editors, sizing up their audience, decided to go with a decidedly anti-Bush lead on the article, though the body of the article has little to do with Bush.)

For the most part, public skepticism of evolution remains uniquely American. When asked in a 2004 government-sponsored survey to answer true or false to the statement that “human beings, as we know them today, developed from earlier species of animals,” only 44% of Americans answered “true.” This finding was in sharp contrast to the results from surveys in other countries. For example, 78% of Japanese respondents answered “true” to the statement, as did 70% of Chinese, 70% of all European respondents, and more than 60% of South Korean and Malaysian respondents. Only in Russia did less than half (44%) of respondents answer “true.”

Yet, despite these poll findings, intelligent design is indeed capable of spreading in international influence. Politically, much like it has done in the U.S., the ID movement will seek access by way of national and local conservative leaders. The global diffusion of American evangelical missionaries is also likely to interject elements of the ID debate into countries where it has not previously existed. For example, writing last year in the journal Science, Mexican biology professor Antonio Lazcano reports that only twice during his thirty-years of teaching evolutionary biology has he encountered religious opposition. “In both cases, it came from evangelical zealots from the United States preaching in Mexico,” writes Lazcano. “One of the little recognized U.S. imports into Mexico is a small flow of creationists, who, through religion, are trying to impose their fundamentalist beliefs and hinder the teaching of Darwinian evolution in all levels of schooling.”

Internationally, the public relations campaign in support of intelligent design is likely to follow a similar pattern as in the U.S., targeting specific audiences with specific messages designed to persuade and mobilize. In the mainstream media and aimed at the general public, ID advocates will define their message around the perceived uncertainties in evolutionary theory, arguing that students deserve to be “taught the controversy.” International journalists may amplify this message by resorting to a false balance in reporting, pitting the comments of ID advocates against mainstream scientists in a “he said, she said” news format. However, to their potential base of Christian and Catholic conservatives, ID advocates will carry a different message, blaming evolution for the moral decline in society, and for the erosion of traditional values and Church teachings.

Even though Europeans tend to be generally more secular in their leanings than Americans, a general level of cultural ambivalence may leave many Europeans open to the ID movement’s PR campaign to “teach the controversy.” Some survey evidence points in this direction, as a BBC poll earlier this year found that 41% of Britons said that they thought ID specifically should be included in the science curriculum, while 44% indicated creationism should be taught.

In predominantly Catholic countries in Europe and Central/South America, the continued mixed message from the Catholic Church leadership may create an additional opening for ID advocates. Though Cardinal Schonborn in arguing the merits of ID in the pages of The New York Times appeared to counter Pope John Paul’s endorsement of evolution, other statements indicate no change in official church position. In fact, in January of this year, the official Vatican newspaper L’Osservatore Romano declared that ID is not science and should not be taught as a scientific theory in schools. Similarly, in November of 2005, the Jesuit director of the Vatican Observatory said that “intelligent design isn’t science even though it pretends to be,” and that it had no place in science courses.

On the other hand, various Catholic archbishops continue to endorse ID. According to media reports, George Pell, the Archbishop of Sydney, Australia has said that while the theory of evolution is compatible with the church’s teaching, it is sometimes taught “in an anti-God way” and he would “be happy for [science teachers] to talk about design or intelligent design.” Donald Wuerl, the Archbishop-designate of Washington, D.C. has reportedly endorsed intelligent design’s “reasonableness,” while encouraging that students be taught alternatives to evolution.

For now, ID remains an American political phenomenon. If it does make significant inroads internationally, the pattern of persuasion across countries is predictable, with arguments in support of ID flowing from popular media outlets to the general public, gaining political access by way of conservative political leaders, while enjoying its strongest public support among Evangelicals and conservative Catholics. Scientists, science educators, and secularists across countries can learn from the mistakes of the American scientific community, who were too slow in taking the threat of the ID movement seriously. Focused public engagement strategies will be key to effectively countering ID tactics.

In a recently released American documentary film about ID titled “Flock of Dodos,” the director, a former evolutionary biology professor, argues that the scientific community needs to become more public relations savvy. In other words, the scientific community needs to apply more of a “scientific understanding” to how the media is being used strategically to support ID, and to how the public is likely to make up its mind about the issue.

Indeed, my own published academic research on public attitudes about politically controversial science shows that the public relies heavily on information short cuts like their religious values and their ideology to form opinions. They use these values as perceptual screens, only paying attention to the definitions of an issue that are most readily available in news stories, and that resonate with their values. Except for a small segment of the public, knowledge plays a very limited role in shaping opinion. In fact, for most of the public, they don’t see the debate over ID as a scientific one, but rather a controversy over values, fairness, and community. This means that re-framing the evolution debate in language that resonates with public values is important.

One framing strategy that has worked in the U.S. is to re-define the issue away from the debate over the science, and to talk about the possible damage to the economic reputation of the community, the state, or the country if ID were added to the school curriculum. A second interpretation that appears to be persuasive is the narrative that arose from the Dover court decision, where ID was re-defined by Judge Jones as driven by the political agenda of a small number of Christian conservatives who were seeking to push their religious interpretations on the local community. Far from a religion versus science issue, ID was defined by Judge Jones as a conflict between out-of-touch cultural conservatives and modern society, an interpretation that fits closely with reality.