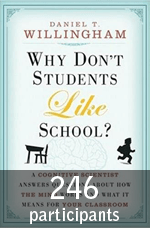 Whew! It’s consumed a lot of my time the past week but I am pleased to say that the 2009 CASTLE Summer Book Club is off and running! [Okay, more accurately, I should say that it has consumed a lot of the valuable time of Laura Bestler, CASTLE’s technology coordinator. Thank you, Laura!]

Thanks to a few last-minute folks, our grand total is 246. Participants are busy introducing themselves (and learning how to comment on a blog!). If you want to follow the action, here are our four discussion groups:

Even if you’re not an ‘official’ participant and thus can’t post to the group blogs, you still can play along at home by leaving comments (be sure to read the copyright notice in the initial Getting Started post). If you’re interested, each discussion group also has RSS feeds and e-mail subscription options for both the posts and the comments.

The book club has a Twitter and Technorati hashtag (#castlebc) and a Twibe.

Hope you’ll join us for our live podcast with Dr. Daniel Willingham, the author of Why Don’t Students Like School?, at 12pm Central on July 13!