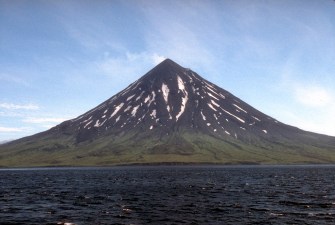 Just when you thought it was exciting enough in the Aleutians, word comes in that Cleveland Volcano is erupting as well. Cleveland is a very noisy volcano on Chuginadak Island, having last erupted in February (although it hasn’t been updated on the GVP page). Aircraft have been warned about both eruptions in the Alaskan island chain. Along with the eruption of Okmok Caldera, the AVO has their hands full watching these volcanoes. The latest on Okmok has a 24,000 foot ash column continuing to be emitted from the new vent.