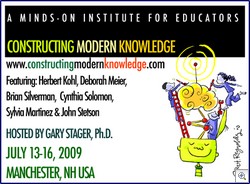 A learning institute in Manchester, New Hampshire in July. Well, Manchester routinely appears on lists of best places to live. It’s in New England, which will be all green and lovely that time of year. AWESOME.

And the conference is hosted by Dr. Gary Stager, so I know it will be thought-provoking and brain-stimulating. DOUBLY AWESOME.

And the featured faculty will include Deborah Meier, Herb Kohl, Sylvia Martinez, John Stetson, and others. And attendees get a free copy of Kohl’s new book if they sign up by June 5. And there will be an evening reception at the famed FableVision Studios as well as a night out in Boston. TRIPLY, QUADRUPLY, and QUINTUPLY AWESOME.

Chuck Heinlein, Director of the Leadership Center for 21st Century Schools at the West Virginia Department of Education, will be our guest tomorrow on the 4 Guys Talking podcast. Chuck […]