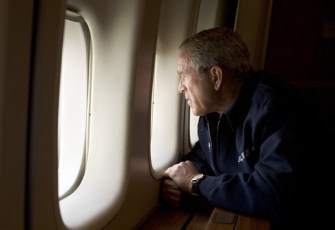 President Bush observing the disaster in New Orleans from Air Force One.

For a campaign that appears to be making all the right moves, Mother Nature might be the one variable that the McCain team can’t control. As New Orleans prepares to evacuate three years to the day that Hurricane Katrina hit, Republicans should not be happy.

Indeed, it was Hurricane Katrina that sent the Bush administration’s approval ratings plummeting. As I detailed in this blog post back in 2006, Hurricane Katrina suddenly made long standing claims that the Bush administration was out of touch with the facts on the ground in Iraq that much more resonant. The disaster also gave greater narrative fidelity to allegations that Bush had traded expertise for ideology and cronyism on a host of issues ranging from weapons of mass destruction to the politicization of science.

So now, just as the Republican Convention is launched at the end of this week, news headlines could potentially be dominated by an event that sends the most powerful of reminders of everything that went wrong with the Bush presidency. 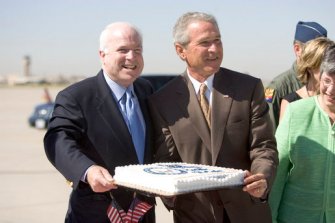