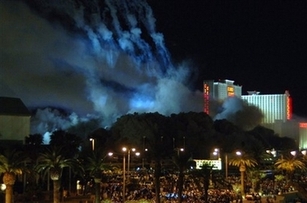 Is this what Joseph Schumpeter had in mind when he coined the phrase “Creative Destruction”? Today, the Las Vegas Strip’s first mass-market casino-hotel, Stardust, was imploded to make way for Boyd Gaming Corp.’s $4.4

billion megaresort Echelon: “Hundreds of people partied beneath tents and on makeshift patios before

that chased the revelers into cars, buses and nearby casinos.”

Hey, what happens in Vegas, stays in Vegas.