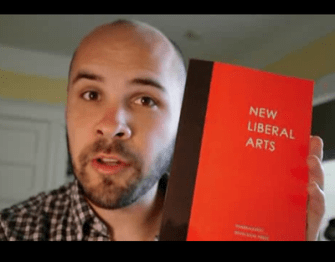 Brooklyn-based Kickstarter enables people to “crowd-fund” new artistic projects (books, movies, films, etc.) and then follow along the progress of the project through regular updates. In my first-ever Kickstarter project, I helped to crowd-fund a new book from Robin Sloan (a former Current TV exec and aspiring novelist) after reading about it on CNET:

“I’m writing a book: a detective story set halfway between San Francisco and the Internet. And the more people who reserve a copy, the better each one will be! The basic setup is: Imagine a Sherlock Holmes for the 21st century. All the really good cases are on the internet. And Holmes is a woman, and Watson is an A.I., and San Francisco… oh, poor San Francisco… […]

Now, the goal of this project is to put a book in your hands. And the cool thing about books is that they enjoy tremendous economies of scale. So here’s the opportunity: as more people reserve books, everybody’s book gets better, because a bigger print run means everything is cheaper. If I can get 300 backers, the book will be really nice: perfect-bound with a crisp color cover. If I can get 600 backers, suddenly we’re talking better materials, more colors… maybe even hardcover? And more than 600…? Why, it’ll be made of PURE GOLD.”

Robin’s goal was to raise a modest $3500 from other micro-funders in a period of about two months, but he ended up raising nearly $14,000 from 569 backers! Along the way, he provided 16 updates about the status of the book — including one ingenious update while flying in a plane, and another update about the clever technique he used for the naming of characters in the novella. (Just an aside – Robin gained another 15 minutes of Internet fame this fall when Twitter announced that he was the author of the five-billionth tweet).

Anyway, I’m looking forward to receiving the book in the mail — as well as funding other interesting artistic projects featured on the Kickstarter site. If you’ve ever used a site like Kiva to make micro-loans, the overall look and feel of Kickstarter should be familiar. As with Kiva, the actual funding for the project is not disbursed until the entire pledge has been met, so even though I “funded” Robin nearly two months ago, the money wasn’t actually debited from my bank account until November 1.