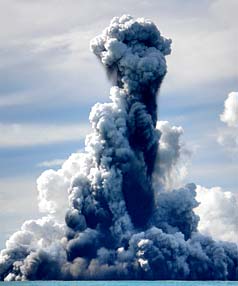 Now that people have been able to get a better look at the are about Hunga Tonga Hunga Ha’apai, we’ve been able to get a better idea of what sort of eruption occurred. The explosions and ash/tephra from the eruption have all but wiped out life on Hunga Ha’aapai, as the island contains one of the vents, while the other is only 100 meter off shore of the island – although the tephra erupted so far have joined the new vent and the island. You can clearly see ash mixing with the water around the island and the island itself has been blackened by the coating of ash. This is a classic volcanic atoll island-building event and the question will be how long will the enlarged Hunga Ha’apai last and how last will the eruption continue.

Of course, with any large eruption, there are a lot of, well, questionable things that go along with it, such as:

Hopefully the media won’t lose interest in this island-creating event if the eruption goes on for days as it is a wonderful opportunity to see the birth of a South Pacific island (or at least the growth of one) in action.

Related
The Future
Custom Image Test
Lorem ipsum etc etc etc etc
Life
Visualization test
Lorem ipsum dolor sit amet, consectetur adipiscing elit. Nullam id tincidunt mi. Morbi malesuada nulla sit amet est hendrerit tincidunt. Etiam viverra, nisl id volutpat eleifend, est augue sodales orci, […]
L&D Strategy
Transfer of learning: The necessary step to make learning stick
Transfer of learning is a concept that should be top-of-mind when planning any learning and development program. Why? In a perfect world, the billions of dollars organizations collectively spend every […]
Starts With A Bang
Why we’ll never see back to the beginning of the Universe
We thought the Big Bang started it all. Then we realized that something else came before, and it erased everything that existed prior.
Thinking
Is there an afterlife? See how your answer compares to polled Americans
There is more consensus on what heaven looks like than hell.
Up Next
Guest Thinkers
Rooster tails and new islands (and video, too)
Hunga Tonga Hunga Ha’apai volcano has been putting on quite a show for people lucky (or unlucky) enough to be close enough to see it.