Mixing volcanoes and oceans seem to always produce exciting results. Whether it is something as simple as the ocean entry of a lava to something as impressive as a new island emerging, formed by volcanic eruption. Back in the 1960s, a previous unknown undersea volcano off the coast of Iceland erupted to form the island of Surtsey. The signs of the impending eruption were captured from start to finish, with Icelandic fisherman noticing “boiling seas”, then steam explosions, then ash eruptions and finally volcanic tephra that formed the island itself. This was followed by lava flows and fountaining once the vent was protected from the sea. Many times these volcanic island are ephermal, getting washed away by ocean waves, but Surtsey survived and these type of eruptions gained the name “Surtseyan”.

We could be seeing the latter in Tonga right now, as the Hunga Tonga Hunga Ha’apai volcano has been putting on quite a show for people lucky (or unlucky) enough to be close enough to see it. The volcano is continuing to spew ash and rock, reaching altitudes of 15,000 meters (50,000 feet) initially, but now reach 4,000-7,000 meters (15-25,000 feet)- you can see the eruption in this great MODIS image taken right after the eruption was discovered. The BBC has also posted video of the eruption, showing beautiful rooster tails (see above) in the eruption plumes (and at the end you can hear some panicked volcanic gazers who captured the video), which are typical for Surtseyan style eruptions. These tails are formed by a mix of steam (caused by boiling ocean water) and the dark volcanic ash being erupted.

Eyewitness reports from the area claim that all wildlife on the nearby islands that the volcano is named have been wiped out and that they saw “burning sea birds falling from the sky” – my guess is they got caught in the superheated steam plumes from the eruption. Interestingly, the early reports that the eruption was preceded by a strong earthquake felt in the capitol of Tonga might be prematurely linking the seismicity with the eruption. Tongan officials will be heading out to inspect the area (as soon as they figure out who’s going to pick up the tab).

UPDATE 3/19/2009 1:30PM Pacific – I didn’t notice this in some of the early pictures, but there are definitely two vents erupting: 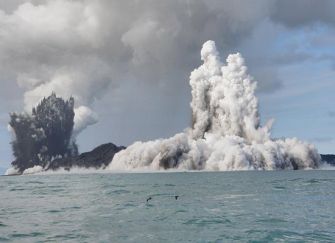 {Hat tip to the Volcanism Blog for the MODIS image link}

Related
Life
Visualization test
Lorem ipsum dolor sit amet, consectetur adipiscing elit. Nullam id tincidunt mi. Morbi malesuada nulla sit amet est hendrerit tincidunt. Etiam viverra, nisl id volutpat eleifend, est augue sodales orci, […]
L&D Strategy
Transfer of learning: The necessary step to make learning stick
Transfer of learning is a concept that should be top-of-mind when planning any learning and development program. Why? In a perfect world, the billions of dollars organizations collectively spend every […]
Starts With A Bang
Why we’ll never see back to the beginning of the Universe
We thought the Big Bang started it all. Then we realized that something else came before, and it erased everything that existed prior.
Thinking
Is there an afterlife? See how your answer compares to polled Americans
There is more consensus on what heaven looks like than hell.
Thinking
How science changes the way we think, according to 10 leading scientists
A group of prominent scientists shares how research has changed them.
Up Next
Guest Thinkers
A third ocean lava entry at Kilauea
Lava issuing from the current eruptions at Kilauea have started a third ocean entry (and the second within the Hawai’i Volcanoes National Park). The entry is not as dramatic as […]