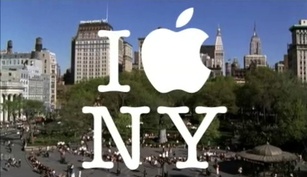 “Kudos to Alec Sutherland, who has put together the best fake ad for a real product I have ever seen in the form of “iPhone New York,”

a brilliant, professional spot that shows people of every language and

culture raving about the iPhone. I almost teared up, and I’m all West

Coast and stuff. Bonus points for use of “Young Folks” by Peter Bjorn

As can be seen above, the “ad campaign” visually references the ever-popular “I Love New York” campaign. Mayor Bloomberg would be proud.

[image: iphonenewyork via Cult of Mac]