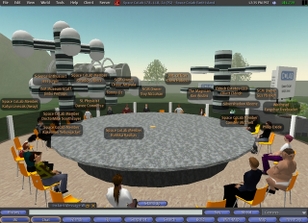 nNASA is experimenting with Second Life as a platform for broader collaboration on the future of space exploration. The space agency has already created a virtual island in Second Life and is now conducting regular meetings involving avatars in Second Life:

“NASA officials say their island in Second Life could hold a key to the future of space exploration in real life. Thenagency is using the virtual world as part of CoLab, an initiative thatnbrings together a diverse group of NASA employees, business leaders,nsoftware programmers and individuals outside the traditional spacencommunity. The goal is to create a collaborative space where peoplenworking in different areas can “interact and cross-fertilize ideas…”

Through CoLab, software experts are also working toncreate open-source software called CosmosCode that NASA can use in itsnprojects. Eventually, CoLab leaders plan to build a real-world facilitynin San Francisco where interested parties can collaborate with NASA.“

In addition to increasing the collaboration between members of the space exploration research community, the Second Life initiative is viewed as a way to increase the agency’s transparency to the public. Apparently, participants in the weekly NASA staff meetings range from NASA employees andnother space professionals to Second Life novices who stumble on thenNASA island! (This might be stating the obvious, but let’s just hope that we don’t wake up in a few years from now and find out that the U.S. space program has been secretly infiltrated by a bunch of cyber-terrorists.)