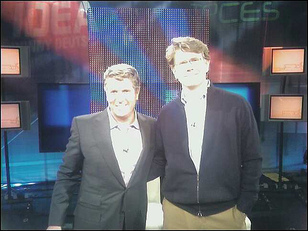 About two weeks ago, I posted about Peter Semmelhack and his amazing new start-up company BUG Labs. For a special client engagement, I had the unique opportunity to hear him speak live in-person in New York City and walked away quite a bit impressed with his vision for the future of open-source hardware and DIY consumer electronics. Well, it turns out the folks at CNBC also are more than a bit impressed with Mr. Semmelhack. On December 20, I happened to be flipping cable channels at night when I ran smack-dab into a special “The Big Idea” show on CNBC featuring Donny Deutsch and none other than Peter Semmelhack and BUG Labs! That’s big time!

Over at the BUG Labs blog, there’s a behind-the-scenes summary of CNBC’s “The Big Idea” show and lots o’ links to Flickr photo goodness. A big hat tip to Peter and his team at BUG Labs!