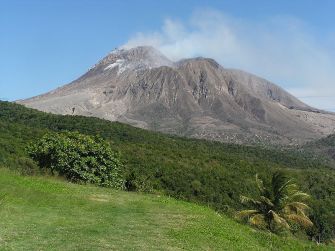 nnJust to keep everyone on their toes, Soufriere Hills on Montserrat in the West Indies erupted today. The eruption produced a number of explosions and a pyroclastic flow that originated from the west side of the lava dome at the summit of the volcano. However, the most interesting bit comes from the Montserrat Volcano Observatory (MVO) report I received this morning:n

“The explosion happened without any warning. There was no precursory seismic activity.”

nSounds like it could have been a dome collapse caused by a rapid release of gas/steam? The explosion apparently threw blocks as far as a kilometer from the dome and incandescent (i.e., hot) material end up on Gages Mountain slopes. The pyroclastic flow itself made it all the way to the sea via Plymouth (the former capitol) and building were set ablaze by the flow in the abandoned city. The ash column from the eruption is also producing lightning.

Keeping an eye on Redoubt

nnRedoubt Volcano, in Alaska, is one of the more troublesome volcanoes in the state. Not only is it relatively close to population centers, but it also lies directly within the […]