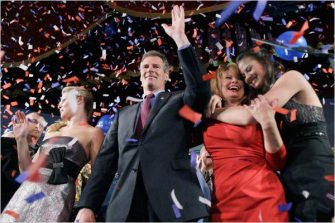 The Brown-Coakley Senate race in Massachusetts, which ended with the hugely unanticipated victory of unheralded newcomer Scott Brown for the Kennedy Senate seat, seems to be one of those “defining political moments” that you always read about in history textbooks. This, after all, was the U.S. Senate seat occupied by Ted Kennedy for over 40 years. The idea that an unknown Republican could win the Senate seat in the “bluest of blue states” — especially after Barack Obama carried Massachusetts by more than 25 points just over a year ago – is staggering. And not just for political junkies.

Beyond politics, there are lessons for business leaders from Brown’s dramatic Senate win. More than anything else, Scott Brown’s surprising victory over Martha Coakley reminded me of an entrenched, market-leading company completely blindsided by a disruptive new competitor better attuned to the needs and wants of consumers. With that in mind, here are five lessons for CEOs from the Massachusetts Senate race:

(1) If you only protect your “premium” customers and cede low-margin customers to upstarts, you will eventually lose all of your premium customers. In the Brown victory, Massachusetts independent and undecided voters played a huge role in deciding the balance of the outcome. While Coakley focused on the rank-and-file voters who turned out election after election to vote Democrat, Brown turned his energy to independents. Heading into the Senate showdown, Coakley assumed that concentrating her campaign efforts on her base of Massachusetts liberals and then invoking the Kennedy mystique would be enough to win. She was wrong. In much the same way, blue chip companies tend to cede too many low-margin or potential customers to upstarts and rivals, content to cherrypick high-margin, high-profile customers. Over time, market share becomes eroded and products lose their appeal to a wider audience.

(2) If you lose touch with the thoughts and aspirations of your consumers, you will lose them to competitors that are 100% focused on super-serving them. What Coakley forgot was that healthcare and jobs were the #1 and #2 issues in the election. Other long-time Democratic issues were non-factors. Jobs and healthcare were the two issues that resonated most with voters. Brown recognized this and ran as the anti-Obama candidate. In the same way, entrenched businesses sometimes lose focus on what matters to consumers. For example, they may focus on adding new features and technologies, when consumers are instead focused on cost and value. Or they may underestimate the value of sustainability issues to consumers who are concerned about going green.

(3) Empower your managers to transform weaknesses into strengths. Heading into the Senate election, Scott Brown was an unknown quantity with dim prospects for victory. He was a relative unknown (except to Cosmo readers). Instead of accepting this as a disadvantage, Brown found that it gave his campaign team a unique opportunity to define him for the broader electorate. A blank slate became a positive. And he filled that slate with stories about driving a GMC pickup truck and anecdotes about local sports teams. Once he did so, voters began to accept him as one of their own.

(4) Find creative ways to tap into the emotions and passions of potential customers — not just existing customers. While Coakley assumed that she could win by conducting business as usual in Massachusetts, Brown realized that he could capitalize on the bigger picture of what was going on in Washington. In his political calculation, fence-sitters became a possible base of emotional, passionate supporters. In doing so, he went with the polarizing statement that he wanted to become the “41st Senator.” This symbolism wasn’t lost on voters — they recognized this as a promise that Brown would tilt the balance in the Senate from 60:40 to 59:41 and prevent a filibuster-proof Democratic majority. In doing so, Brown claimed a critical role in the national debate over healthcare and economic stimulus.

(5) Don’t introduce moral hazard into your business by making a bailout from corporate HQ a realistic option. Coakley assumed that a last-minute appearance by Barack Obama in Massachusetts over the weekend prior to the election would be enough to turn the tide. But by that time, it was too late. The cavalry arrived too late. In the same way, business units within an organization sometimes assume that end-of-quarter budget requests to HQ can paper over losses and problems. Or small start-ups assume that deep-pocketed VC investors will be there with the Series B round of financing to deal with problems incurred during the Series A round of financing. Or banks lend recklessly, assuming that the federal government will be there with a bailout safety net. Sometimes it happens, but more often than not, it doesn’t.

[image: The Battle for a Senate Seat via New York Times]