Why is it so important to provide the wider American public with readily available and scientifically accurate “frames” that re-package complex issues in ways that make them personally meaningful and interesting?

Since the late 1980s, the emergence of 24-hour cable news as a dominant news source and the explosive growth of the internet have led to major changes in the American public’s news habits. But a new nationwide survey finds that the coaxial and digital revolutions and attendant changes in news audience behaviors have had little impact on how much Americans know about national and international affairs.

These latest findings parallel trends in science-related news and public understanding. By way of cable and the internet, Americans today have greater access to quality information about science than at any time in history, yet public knowledge of science remains low.

One major reason is the problem of choice: citizens not only select among media choices based on ideology or religious views, but also based on their preference, or lack thereof, for public affairs and science-related content.

As a result, in a fragmented media system suffused with many options, coverage of public affairs and/or science only reaches a relatively small audience of political junkies and science enthusiasts. The information rich get richer whereas the broader American audience literally tunes out.

Consider the example offered in a new book by political scientist Markus Prior. Three decades ago, when Americans sat down at 6pm to watch TV they had only two choices, either network news or PBS news. Today, if an individual lacks a preference for public affairs content, they can select themselves out of the news audience entirely, watching instead MTV, ESPN, movies, or other forms of celebrity, infotainment, or diversionary content. 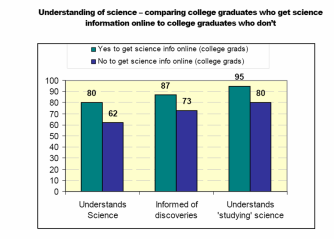 Source: Pew/Exploratorium Survey 2006.
Note: According to Pew’s analysis, those who report finding science-related information online hold higher levels of understanding of science even after taking into account levels of education and interest. On the internet, all things being equal, it’s the science enthusiasts who are the science seekers.
—

Specific to science, the problem of choice shows up in a Pew study released last year on how Americans find information online. Given almost infinite options about where to surf on the internet, the strongest predictor of whether or not an individual used online science-related information was if they stumbled across it accidentally.

Indeed, as the graphic above shows, even among college-graduates, those most likely to use online science content were the already scientifically knowledgeable.

Bottom line, the availability of scientific information does not mean people will use it.

That’s one of the central arguments that we put forth in our commentaries at Science and the Washington Post, and that I elaborate on here and in this recent Point of Inquiry podcast.

A quick recap of the key points:

–>The overwhelming majority of Americans do not get information about science from traditional science coverage. Instead, they are most likely to become aware of a scientific topic when it becomes controversial and spills over into the political or opinion pages, or even more likely, when it becomes the subject of celebrity and entertainment media content.

—>In these contexts, opponents of science–on issues like climate change, the teaching of evolution in schools, and stem cell research–are framing messages in ways that fit these media environments and that play on the cognitive biases of Americans.

For some of our critics, this is what they argue, that framing means losing scientific integrity. Yet they also miss a key point. Framing doesn’t have to mean accenting false information and interpretations.

What we are suggesting is that scientists take advantage of what research says about how audiences interpret messages across our fragmented media system and use this knowledge to more effectively engage the broader American public.

It’s simple: frame or be framed.

–>Scientists should remain true to the underlying science, but recast messages about issues such as climate change, the teaching of evolution in schools, and stem cell research in ways that make them more personally meaningful to Americans who otherwise probably tune out the scientific details.

–>Yes: Framing does mean “dumbing down,” but so does any form of popularization. As we’ve written over and over again, there will always be a small audience for elaborate explanations of evolution and other areas of science.

Yet these technical explanations will not be given adequate attention by political journalists, pundits, or other media producers. Nor will they be paid attention to by a broader American audience who lack a strong preference for technical details.

How then do you engage a wider American public by way of the media genres that they regularly consume?

Framing has to be a central part of any strategy.


Related
Life
Visualization test
Lorem ipsum dolor sit amet, consectetur adipiscing elit. Nullam id tincidunt mi. Morbi malesuada nulla sit amet est hendrerit tincidunt. Etiam viverra, nisl id volutpat eleifend, est augue sodales orci, […]
L&D Strategy
Transfer of learning: The necessary step to make learning stick
Transfer of learning is a concept that should be top-of-mind when planning any learning and development program. Why? In a perfect world, the billions of dollars organizations collectively spend every […]
Starts With A Bang
Why we’ll never see back to the beginning of the Universe
We thought the Big Bang started it all. Then we realized that something else came before, and it erased everything that existed prior.
Thinking
Is there an afterlife? See how your answer compares to polled Americans
There is more consensus on what heaven looks like than hell.
Thinking
How science changes the way we think, according to 10 leading scientists
A group of prominent scientists shares how research has changed them.
Up Next
Guest Thinkers
Students Debate “Internet & Community,” Part B
This spring in the sophomore-level course I teach on “Communication and Society,” we spent several weeks examining the many ways that individuals and groups are using the internet to alter […]