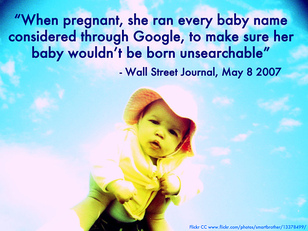 nYet another example of the way that Google is changing forever the fabric of our lives – parents are choosing baby names based on the probability of them rising to the top of a Google name search:

“I think this is one of those things thatnsounds remarkable only because no-one has explicitly said it in sonpublic a forum before – but is a real sign of the times. If I’d readnthis 5 years ago I’d have thought it was a bit odd; now – to me atnleast – it just seems commonsense and responsible.

It’snnormal to do a lot of thinking about the choice of name for a baby…nconsidering how it might be abbreviated as a nickname, which familynmembers will be offended/pleased, how it appears visually when written,nare there any notorious criminals with the name, etc etc. I bet Googlenis used in a lot of this research… so it’s not a big leap to thinknabout how your own baby might fare in being able to be found in googlenin future.”