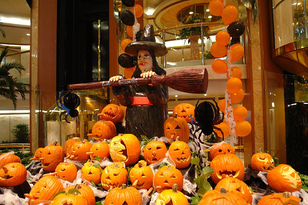 If there’s one holiday that unleashes “an arms race of creativity,” it’s Halloween. Unlike other holidays, there’s very little in the way of religious decorum or tradition that keeps people from going all-out in their decorations and costumes. In mid-October, marketing guru Seth Godin pointed out that Halloween is fast becoming the #1 holiday for innovators:

always will be. Many families spend 25% of their discretionary income

each year on gifts and trinkets for the holiday.

But Halloween is coming on strong. What’s fascinating to me is that

for yuppies and boomers and everyone else to spend time and money.

Halloween represents a real transition point, imho, between a backward-looking tradition and a Make-magazine

In other words, a growth industry that depends on betting on the ego

and smarts of your customer.”

This year, I’ve been especially attuned to the way that young professionals in New York are going about their preparations for Halloween. While they may lack the large suburban homesteads to trick out with jack-o-lanterns, they more than make up for it with their creative costumes. If you’ve never sat next to a lawn monster and zombie on the subway while making goo-goo eyes at the Catwoman and policewoman across the way from you, you haven’t really experienced Halloween.