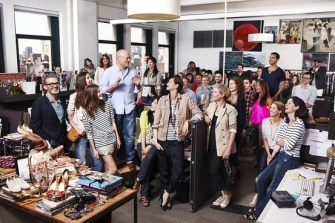 So much of what makes for a great innovator is not the ability to come up with a great idea — but, rather, the ability to “merchandise” that great idea to others. How do you convey the essence of your innovation to others so that they immediately recognize the brilliance of that idea? As part of an extensive, 12-page profile for The New Yorker, J. Crew CEO Mickey Drexler (pictured above left in untucked Oxford shirt, jeans and Alden wingtips) explains to writer Nick Paumgarten exactly what “merchandising” an idea requires:

“More than once, I asked Drexler to define “merchandising.” Sometimes he’d put the question to one of his junior merchants, who had perhaps got some of their definitions from the loudspeaker. “It’s telling America what to buy,” one told him. “It’s about investing in something and then selling it,” another said. These seemed to strike him as too prosaic or too crass. They made no mention of the eye or the gut or of the throbbing sensation that comes over you when you see something that you are sure will sell, and sell out. […]

“A merchant is someone who figures out how to select, how to smell, how to identify, how to feel, how to time, how to buy, how to sell, and how to hopefully have two plus two equal six,” Drexler told me. “We buy and sell goods. We buy low and sell higher – that’s all we do to make a profit. But I consider a merchant someone who has a certain intuition and instinct, and – very important – knows how to run a business, knows the numbers. Does the merchandise speak to you numerically? There’s a rhythm. You see goods as numbers. And the numbers have to work out.”

Pure marketing brilliance, from one of the leading merchandisers in the business. And also a reason why Drexler hobnobs with billionaires and celebrities; serves on the board of Apple; and owns property in New York City; in the Hamptons (including the former estate of Andy Warhol in Montauk); in the Bahamas; and in Sun Valley, Idaho.