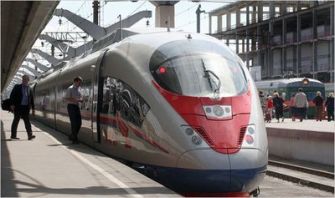 Mr. McGuire: I want to say one word to you. Just one word.

Mr. McGuire: Are you listening?

Benjamin: Yes, I am.

Benjamin: Just how do you mean that, sir?

More than 40 years ago in the film The Graduate, the buzzword of the day was “plastics.” In 2010, I’m wondering if the buzzword might just be “high speed trains.” There’s been a lot of chatter out of Washington about building a national high-seed train network, partly as an economic stimulus measure and partly as an environmentally-sound move to get more cars off the roads. In California, there’s talk of using high-speed trains to connect the northern and southern parts of the state. And there’s even been mention of converting Detroit’s shuttered auto factories into high-speed train factories.

The push toward high speed trains is not just an American domestic issue. High-speed trains have always captivated the imagination of innovators in Japan and Europe. Now Russia is getting into the act. The magnificent Sapsan (“peregrine falcon” in Russian) trains (pictured above) will now connect Moscow and St. Petersburg in less than four hours. Moreover, those trains will have plush leather seating, gourmet meals, and presumably, a very nice selection of premium Russian vodkas.

Back in the day, I remember leaving Leningradskiy Vokzal in Moscow for the long overnight trip to St. Petersburg. Even on the rapid “Red Arrow” train (the favorite of American expats — sorta like the express Acela trains that Amtrak has), it was still 7-8 hours to get into Petersburg. By cutting down the time to less than 4 hours, the Sapsan trains are making it significantly easier than ever to travel between the two cities.