As we all know, we are in the midst of a massive economic downturn. Every month is accompanied by reports of additional, large-scale layoffs. People are losing their jobs in significant numbers. And yet, despite claims that job losses are being felt throughout all areas of the economy, U.S. Bureau of Labor Statistics data clearly show that the impacts of this recession are being felt more heavily by some rather than others.

For example, employees with a 4-year college degree or higher are losing their jobs at a much lower rate than other workers [click on image for larger version]: 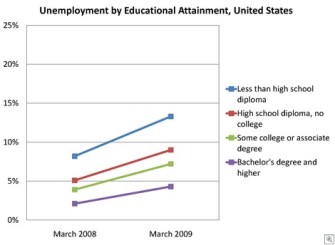 Similarly, jobs in more ‘professional’ employment sectors are being lost at a much lower rate than those that traditionally have required fewer skills and/or education: 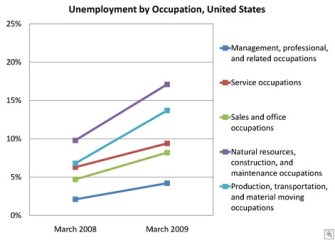 And certain industries are feeling the pain of unemployment much more than others (see more detail if you’re interested): 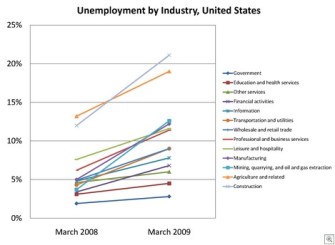 The numbers here in Iowa parallel what is happening across the nation. For example, although our state is weathering the recession better than many, the latest Iowa Workforce Development report shows that 20,000 of the 22,400 non-agricultural jobs lost over the past year are in manufacturing.

The labor statistics over the past year mirror longer-term trends in the American workforce. As the charts below show, the U.S. is now a country in which 75% of our workforce is employed in what Dr. Richard Florida calls ‘service class’ or ‘creative class’ professions. Lower-skill and lower-wage jobs that fall outside these two categories, such as those in manufacturing, are more likely to be lost both in the short and long term. 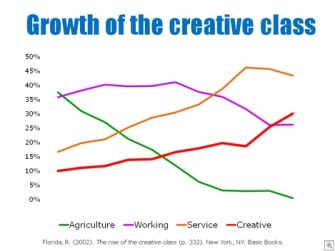 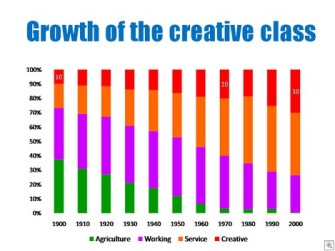 Creative-class jobs, which now make up at least a third of the American workforce and are the only segment of the economy that is growing long-term, require different skill sets such as complex communication, critical thinking, and collaborative problem-solving. These are skills for which schools typically have not prepared most of their graduates. 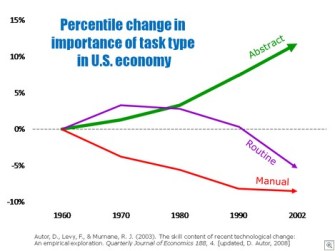 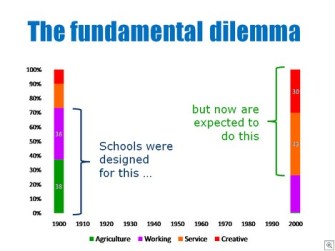 So what do all of these charts tell us? Well, there are no absolute guarantees that your school system’s graduates won’t lose their jobs. But it’s fairly clear that the best way to immunize your graduates from the potential of job loss is to give them the skill sets that they’ll need to 1) acquire an advanced education, and 2) obtain jobs in professional sectors that are long-term growth areas for the American economy (and thus are less vulnerable to short- or long-term downturns). This raises an obvious question, of course: How’s your school system doing at this?

FYI, Episode 3 of 4 Guys Talking is today at noon Central. Follow the link to the live Internet stream, which also includes the call-in number if you want to give us a ring!