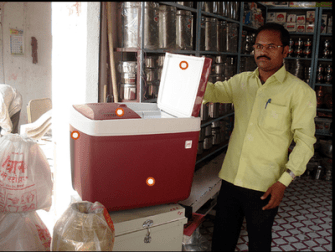 The traditional view of global innovation is that innovation from developed markets eventually “trickles down” to emerging markets in the form of lower-end, less-sophisticated products at lower price points. Think OLPC. Yet, in countries like India, it’s increasingly the case that innovation actually “trickles up” to more developed nations when products are completely re-engineered and re-thought practically from scratch. The Wall Street Journal has a fascinating front-page article on how Indian innovation is upending our traditional notions of how innovation works. Whether it’s the Tato Nano for $2200 or the Godrej Little Cool Refrigerator for $70 (pictured above), multinational corporations are taking a closer look at what they can learn from Indian engineering know-how and innovation.

GE Chairman Jeffrey Immelt refers to it as “reverse innovation” — the tendency now for innovation to migrate from emerging markets to developed markets:

“Such innovations represent a fundamental shift in the global order of innovation. Until recently, the West served rich consumers and then let its products and technology filter down to poorer countries. Now, wth the developed world mired in a slump and the developing world still growing quickly, companies are focusing on how to innovate, and profit, by going straight to the bottom rung of the economic ladder. They are taking advantage of cheap R&D and low-cost manufacturing to innovate for a market that’s grown large enough and sophisticated enough to make it worthwhile.”

What’s surprising about the Wall Street Journal article is that it never once mentions C.K. Prahalad‘s excellent book on emerging market innovation: The Fortune at the Bottom of the Pyramid. Prahalad, of course, is among the leading experts in the world on how Indian companies in sectors ranging from health care to hospitality are at the forefront of global innovation.

[image: The ChotuKool Refrigerator via The Wall Street Journal]