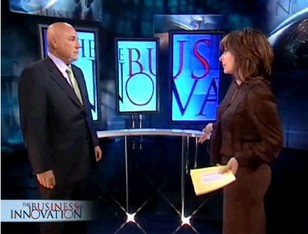 On Sunday night, CNBC aired the second part of its five-part Business of Innovation special: Revolution & Evolution. Episode Two of the series examines how some companies manage to innovate while others

in their same industry struggle to learn the secrets to their success. In some cases, companies focus on slow, incremental changes that lead to an evolutionary type of innovation; in other cases, they focus on rapid, breakthrough changes that lead to marketplace revolutions. It’s not always easy, however, to capture “lightning in a bottle,” which is why I’m in the “evolutionary innovation” camp.

Anyway, Maria Bartiromo (the lovely host of the show) does a great job

of sifting through the various viewpoints on innovation, but is plainly

struggling to come up with a unified theory of innovation. (She refers to innovation as “a maze”) If you listen to her carefully, she seems to subscribe to the theory that every successful person who is well-known and powerful must be innovative. That’s a nice start, but it inevitably leads to a lot of confusion, since every person has some kind of unique “secret sauce,” such that the subject of innovation becomes as inscrutable and mysterious as ever.

speaker, Maria gushes how “fascinating” and “interesting” the views are,

and then dutifully presses on to the next interview. The guests on Episode

2 include Christie Hefner, CEO of Playboy; Terrell Jones, Founder of Travelocity.com; Tarquinio Teles, CEO of Hoplon Entertainment; Russell Simmons, CEO of Rush Communications; and Larry Huston; Former VP of R&D at Procter & Gamble. It’s a unique mix of innovators, to be sure, but — with the exception of Simmons — we really don’t hear a lot from them in any detail.

In addition, there are special segments featuring Alan Mulally of Ford Motor Company and Warren Buffett of Berkshire Hathaway, after which the guests of the show debate whether or not Ford and Berkshire Hathaway are innovative or not. Warren Buffett radiates a kind of folksy, don’t-stir-the-pot type of charm and his investment ideas date back to the days of Benjamin Graham, yet Maria Bartiromo doggedly clings to the view that Buffett is some kind of master-innovator. Which led to my comment above — that Maria views any super-successful person as being some kind of innovator. As much as I respect Buffett, take a look at his portfolio – it’s chock-full of names like Coca-Cola. Good, solid, American companies, but nothing at all tech- or biotech-related (although I hear he’s getting into foreign currency markets these days).

There’s perhaps only one major complaint that I have about the show. The folks at CNBC decided to pair up Maria with co-host Roger Schank (pictured above), who has been variously identified on the program as the CEO of a company called Socratic Arts, a learning expert, an innovation expert, the former chair of the Yale computer science department, a computer entrepreneur, and a professor at Northwestern. Suffice it to say that he’s had an interesting background and can probably approach innovation from a number of different perspectives. However, he’s brash, abrasive and loud-mouthed — so much so that he really detracts from the value of the show. Case in point: he practically yelled at legendary management guru Gary Hamel on the show, cutting him off mid-sentence. That may work on “Hardball” or “O’Reilly” but not on a serious business show. Roger is like a loud, aggressive bulldog confirming everyone’s worst fears about innovators. Roger says that most companies are too stupid and too small-minded to ever become innovative. It may be the case, however, that they really don’t want to deal with “bulldozers” like him. (his words, not mine)

[image: Maria and Roger on The Business of Innovation]