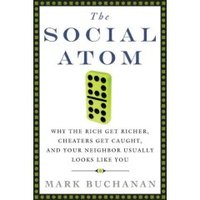 nThe Social Atom could do for physics what Freakonomics did for economics: turn a formerly dismal science into something provocative, timely and relevant. Even if you have absolutely no idea what Schrödinger’s Cat is, have never sketched out one of Einstein’s equations on a cocktail napkin at 3 in the morning, or have somehow avoided reading anything from the likes of Richard Feynman or Stephen Hawking, this new book by Mark Buchanan (the former editor of Nature and New Scientist) sounds fascinating. As Walter Derzko of the Smart Economy blog points out, the book sounds like a mix of Smart Mobs, Freakonomics and The Tipping Point, but with a little theoretical physics thrown in for good measure:

“Why are some bars crowded one week and empty the next? What’snthe logic behind the New York Stock Exchange, and other financialnmarkets, and how do streams of thinking feed on themselves to createnrallies and crashes that no one ever intended? What makes ethnic violence break out? Using these and other examples, Mark Buchanan’s book will show that our collective behavior follows mathematical patterns of surprising precision.  Buchananntakes on the reasoning of major economic theory, and then uses the lawnof physics and the cutting-edge work of some of the world’s mostncreative scientists to explain how by looking at humans as social atomsn(and computer modeling now enables us to do this), we are much morenlikely to be able to predict and understand our own behavior. Butnthis way of thinking does not demean or devalue human life, it merelynaccepts that mathematics and mechanics of the ordinary world apply tonus as much as to anything else. “Lookingnat patterns, not people” in the way that physicists observe atomsnoffers us a basic, yet revolutionary way to understand the ways innwhich we all live together, and why sometimes it works so well, and whynsometimes so badly.”