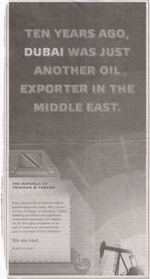 “Every country has a moment before promise becomes reality. With proven success in energy, an educated, English-speaking workforce and significant investment incentives, the stage is set for the right companies to be part of creating an economic hot spot in the heart of the Caribbean. We are next…”

The tagline (which may be hard to read) is meant to inspire confidence in the future of tiny T&T by comparing it to Dubai: “Ten years ago, Dubai was just another oil exporter in the Middle East.”

Which reminds me a lot of how some colleges used to refer to themselves as “the Harvard of the Southwest” (Rice) or the “Harvard of the West” (Stanford). In this case, of course, Dubai is being cross-referenced as the global paradigm for innovation.

Certainly, there’s a lot of innovation coming out of Dubai these days, and T&T apparently has the oil & natural gas reserves that might make investors think of the Middle East. However, while T&T likes to think of itself as being in the “heart of the Caribbean,” it’s actually more the case that the island republic is floating right off the coast of Venezuela, where there’s obviously a lot of oil & gas controlled by a very bad man.

Given that the website listed in the T&T advertisement is InvestTNT.com, a more interesting marketing strategy might involve the legendary rockers AC/DC singing “TNT” in front of packed investor conferences all over the world:

Yo, innovation T&T, watch it explode!