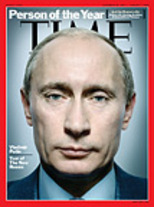 At the airport this holiday season, I did a double-take when I saw the covers of TIME  and The Economist juxtaposed together at newspaper kiosks. Russia and China, it appears, will be spearheading change and innovation throughout the world in 2008. That can either be an exhilarating thought – or a downright disturbing thought – depending on your perspective. Two battered and rusting hulks of Communism have picked themselves off the mat and transformed themselves into the darlings of global investors as well as the engines of worldwide economic growth – but at what cost? 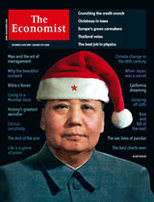 Given that TIME magazine named Vladimir Putin its Person of the Year for 2007, it was interesting to catch chess champion Garry Kasparov’s op-ed response in the Wall Street Journal over the weekend. (As you may know, Kasparov has been running a spirited campaign against Putin & his “vertical of power” as the leader of The Other Russia pro-democracy coalition within Russia.) Kasparov, obviously, is alarmed that “the TIME article will be trumpeted by Kremlin propaganda as an endorsement of Mr. Putin’s policies” and as yet another sign of the West’s “moral weakness” in the face of a grave threat to democracy and human rights. To punch up his point, Kasparov points out that TIME magazine’s Man of the Year in 1938 was none other than Adolf Hitler…

[images: TIME and The Economist]