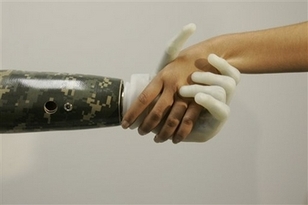 nIs it just me, or has the whole world been buzzing about prosthetics this week? First, I came across an article in The New Yorker from Ben McGrath about bionic prostheses. Then, Chad Farneth of Readymade News linked to a story about Oscar Pistorius (“the Blade Runner”) and the amazing prosthetic feet now available from prosthetic and orthodic designer Ossur.  Finally, Yahoo! News linked to an inspiring story about an Iraqi war veteran who was recently retro-fitted with a bionic arm:

“Iraq war veteran Sgt. Juan Arredondo can grasp tennis balls and doornknobs with his left hand again, now that he’s been outfitted with anbionic hand that has flexible fingers. The 27-year-old former soldier, who lost his left hand in 2005 during a patrol, is one of the first recipients of the i-LIMB. “To have this movement, it’s — it’s amazing,” Arredondo said Mondaynas he showed off the limb made by Scotland-based Touch Bionics. “Itnjust gets me more excited about now, about the future.”

The prosthetic hand is made of semi-translucent plastics. Fivenindividual motors power the fingers, allowing the person to grasp roundnobjects. The hand’s gestures are made possible through electrode platesnthat detect electrical signals generated in the remaining muscles innthe amputated limb. The i-LIMB can be covered with flexible material to mimic the look of human skin, called cosmesis. Arredondo, of San Antonio, likened the limb to the bionics in “StarnWars” and “Terminator.” “My son, he goes nuts about it,” he said.”

I feel like Dustin Hoffman in The Graduate being given advice about the future. Instead of “plastics” though, the word is “prosthetics.”

[image: The Iraqi War Veteran with a Bionic Arm]