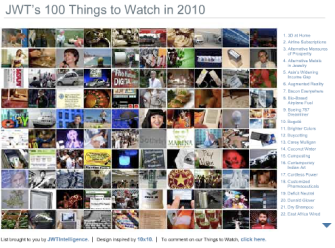 In business, new opportunities often result from the ability to capitalize on an emerging cultural trend. When it comes to spotting this intersection of culture and commerce, advertising & communications agency JWT is unparalleled. With its slogan of “converting cultural shifts into opportunities,” JWT has once again published its annual “100 Things to Watch” feature that points out the people, technologies and cultural trends that will likely impact our lives over the next year. My favorite JWT picks for 2010 include the following:

Interestingly, one of the trends cited by JWT is “Contemporary Indian Art.” I recently returned from a wonderful trip to India over the winter holidays and I’m convinced that India is ready to transform itself from a left-brain nation (accounting, computing, IT, medicine) into a right-brain nation. Instead of thinking about IT call centers, we’ll be thinking about Indian art in London and Hindi comics in Los Angeles.