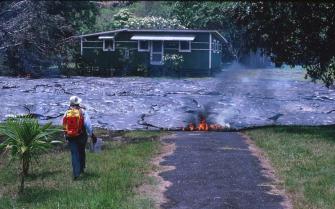 The headline for this entry sounds more dramatic than it is, but one of the last structures in the ill-fated Royal Gardens subdivision on the big island of Hawai’i finally met its fiery demise over the weekend. For those of you unfamiliar with the plight of the subdivision, Royal Gardens is part of Kalapana, and it was unfortunately situated quite close to the Pu’u O’o rift that has been erupting since 1983. Most of the subdivision has been overrun by lava flows since then, but one of the last two structures still being used was done in by the basaltic lava. The first link has a great map showing the October lava flows and where they have gone, along with some stills of the flows overtaking the house (in the video).