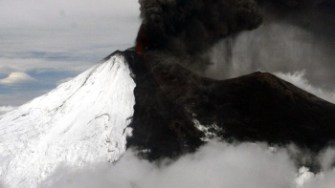 Just a quick note about the eruption currently ongoing at Llaima in Chile. The volcano continues to explosively (and effusively) erupt, sending ash ~22,000 feet / 7,000 meters into the air. This eruption has produced 37 hours of intense eruption (in spanish) so far and the ash from the eruption is drifting into Argentina, almost 100 km to the SE of the volcano. More evacuations are being called for by ONEMI and so far 71 people have left the vicinity of the volcano due to fears of lahars and significant ash fall (In spanish, but it does provide video of the eruption). There is also some great video of the eruption (in spanish again) here.

Oil from the Drift River Terminal near Redoubt to be moved

Finally, after months of inaction, the Coast Guard has ordered the emptying of the Drift River Oil Terminal at the base of Redoubt.