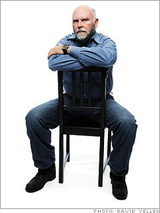 old-fashioned trouble-makers. These 24 disrupters have gone up against

the odds as they’ve rattled old industries and tried to create new ones.” Eberhard, for example, is attempting to build a car with the performance of a Ferrari, but more than twice the fuel efficiency of a Toyota Prius.

ASIDE: If you’re reading this issue of FORTUNE magazine offline, the title has another, more subtle meaning. In addition to referencing the business classic Barbarians at the Gate, the title also refers to the fact that the magazine feature is a gate fold, like this or this.