Looking for some volcano news – you’ve found it. 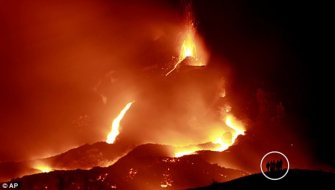 nA shot of volcano “tourists” near the erupting Pacaya. Photo by the Associated Press.

Is today’s small explosion at Eyjafjallajökull a sign that the volcano is entering a new phase of activity or is it just a blip in the quiet?