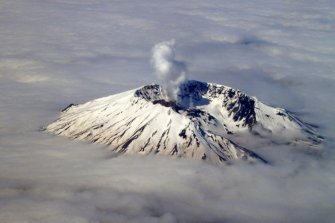 I’m back from my sojourn to New England and its time to play catch up. First things first!

There has been a lot of chatter in my inbox and on the comments here at Eruptions about the study/press release from Graham Hill’s research group talking about the potential for a supervolcano forming at Mt. Saint Helens. This study (presented at the AGU Spring Meeting) was based on a magnetotelluric study of the area around (and below) Saint Helens. For those of you unfamiliar with magnetotellurics, it uses instruments that measure the magnetism and electrical conductivity of the earth to infer the composition of the crust. This is possible because different materials in different physical states have different magnetic properties and/or electrical conductivity. So, this study took magnetic field readings near the modern Saint Helens and interpreted it to try to determine the composition and state of the crust below the volcano. The authors of the paper write that the patterns of electrical conductivity under Saint Helens suggest a large volume of melt underneath the volcano, thus it has the potential to form a supervolcano.

And that is where things might have gotten a little carried away.

My first reactions to the study:

All this being said, am I saying that there is no chance of a “supervolcanic” eruption at Mt. Saint Helens? No. As with most everything in geology, there is a non-zero probability of a large eruption from the volcano. However, I would venture to guess that the probability is very small compared to other volcanoes around the world. If anything, this study shows the difficulty in determining the state of affairs under Saint Helens. It appears that the system is fed from a zone of partial melt in the lower crust that gets fed through a narrow conduit. The proportion of melt in the zone and the exact nature of the material (magma, fluid, or a combination) is unclear. The imaging of this zone under Saint Helens is a great addition to our understanding of one of the most active magmatic systems in North America. However, trying to connect this to “supervolcanoes” definitely seems like pandering to the Discovery Channel-style pop science (and admittedly, this “controversy” seems to be more a product of the media than the researchers if you look at the original abstract).

{Hat tip to Eruptions readers Thomas Donlon, Bob Somerville and Brian for the links to this article.}

Related
Life
Visualization test
Lorem ipsum dolor sit amet, consectetur adipiscing elit. Nullam id tincidunt mi. Morbi malesuada nulla sit amet est hendrerit tincidunt. Etiam viverra, nisl id volutpat eleifend, est augue sodales orci, […]
L&D Strategy
Transfer of learning: The necessary step to make learning stick
Transfer of learning is a concept that should be top-of-mind when planning any learning and development program. Why? In a perfect world, the billions of dollars organizations collectively spend every […]
Starts With A Bang
Why we’ll never see back to the beginning of the Universe
We thought the Big Bang started it all. Then we realized that something else came before, and it erased everything that existed prior.
Thinking
Is there an afterlife? See how your answer compares to polled Americans
There is more consensus on what heaven looks like than hell.
Thinking
How science changes the way we think, according to 10 leading scientists
A group of prominent scientists shares how research has changed them.
Up Next
Guest Thinkers
Vote for the next Volcano Profile
Vote for the next volcano to be profiled on the blog!