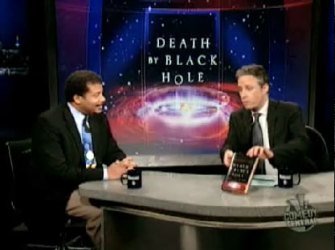 Neil deGrasse Tyson understands the central role of framing in communication and it’s a major reason that Tyson is perhaps the most effective science popularizer of his generation. In a fascinating interview on this week’s Point of Inquiry, here’s how Tyson describes his philosophy and approach to reaching non-traditional audiences via the media (at about 11:40 minutes into the interview):

GROTHE Do you think that mass media, going that route, do you think it undercuts your science education agenda because you have to speak in sound bites, you have to reduce it down to the simplest terms for the widest appeal?

TYSON: That is an excellent question. I think what I have done–and invested a fair amount of social, cultural, and intellectual effort in– is to recognize and understand the various parameters around the media I am using.

For example, if I am invited onto the Colbert Report or the Daily Show with Jon Stewart, I am going to study previous episodes of what the dynamics are between the host and the guest and I am going to see what kind of opportunity does the guest have to speak, how many words are likely to come out of my mouth before I am playfully interpreted …because they are comedy shows of course.

So I will then package the message I want to deliver into the context of that program. That takes effort, I think most people don’t do that and I think it makes for awkward moments.

I do that willingly because I am visiting them in their medium. If they are going to come to my college class, and they are going to listen to my one hour lecture, I am not going to sound bite it for them at that time. They are visiting me in my habitat.

The moment I go into their habitat, I owe the viewer, a delivery of content that fits that habitat. So my challenge then is how do I not compromise on either the principles or the content of science yet deliver it in a form commensurate with the comedic short form sound bite or the evening news sound bite which is a little different…

For any of us who are scientists there is always the temptation to dumb down our field to share it with someone who is uninitiated in the language, in the subject matter, the jargon…there is a strong urge to do that, but it is possible to resist that I have found.

But to resist it you have to know what is going on in the mind of the person. What are the tangled pathways that may interfere with what you are about to say? When you understand that, then you can shape your content in a way that does not dumb it down but that best intersects their capacity to receive it.