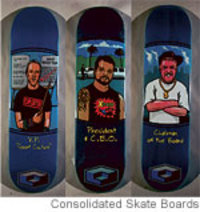 Even if you’ve never read Malcolm Gladwell’s Tipping Point, you probably already know how important “influentials” and “tastemakers” are in the development of a brand that “tips” into the mainstream. In an effort to re-charge growth in the sneaker category, Nike has been reaching out to “influentials” and “tastemakers” in places you wouldn’t normally expect. Whereas once the company might have tried to identify the up-and-coming basketball talent in urban neighborhoods, now the company is redoubling its efforts to find street artists, club kids, muralists, industrial designers and skateboard champs to promote the Nike product and give the company some street cred.

However, as the Wall Street Journal reports, those efforts have met with a bit of cynicism from the very people they were supposed to be reaching. (If you look closely, you’ll see that the skate deck in the middle combines an image of a tattooed Nike exec, but in the background, there’s a white stretch limo, symbolizing the corporate image of Nike.)

Which raises an interesting innovation: Is the goal of the new Nike outreach initiative a way to make some incremental sales to users the company hadn’t been reaching before? Or is the goal to re-invent Nike entirely, which might alienate the company’s core consumer base? That, my friends, is the crux of Clayton Christensen’s Innovator’s Dilemma.